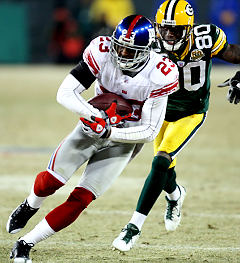 From Mike Garafolo at NJ.com:

The Giants have announced they've signed CB Corey Webster to a contract extension through the 2013 season.

Webster would have been a free agent at season's end. Now, he's an integral part of the team's secondary for a few more years. That's quite a swing from last year when he was benched early in the season. This year, the Giants' second-round pick in 2005 has had a breakout year and has forced teams to throw elsewhere.

The whole story can be found here

Good for Webster. Here's a guy many were labeling a bust halfway through last season, and if memory serves he even lost his starting job for awhile. I'm glad he'll be around for many years to come.