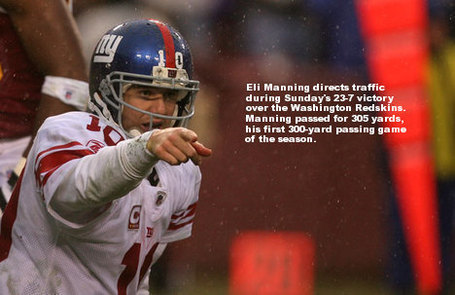 What an amazing football team these New York Giants are!

With every reason to put up a stinker -- the Plaxico Problem, the emotions of the Washington Redskins on a day they inducted Sean Taylor into the team's Ring of Honor, being on the road in front of a hostile crowd, not really needing the victory -- the Giants simply played like the Giants.

They answered the questions about whether or not they could maintain their focus, and answered the challenge of the Redskins the way they have answered every other challenge this season. By outworking and outclassing another NFL team, and by winning another game to reach a lofty 11-1 record.

'Kudos' to the entire team and coaching staff for not allowing the Plaxico Problem to affect them on the field. Sunday's victory tells you all you need to know about the character and resolve of the Giants.

It is, without doubt, intact.

Now, let's get on with the traditional 'Kudos & Wet Willies' style review.

Honestly, I have no 'Wet Willies' to give out. i can't think of a single player who actually played badly.

The Giants are an amazing 11-1, though, and I am just going to sit back and enjoy it for now.