I want to digress a little today and talk about something that is only marginally associated with our New York Giants. The astounding success being enjoyed by former Giant quarterbacks Kurt Warner and Kerry Collins.

When both of these former Giants starters left New York, unwilling to back up Eli Manning, you had to figure that their NFL glory days were gone. They would, for the most part, by relegated to backup roles or bad teams as long as they continued their careers.

For the past few seasons, that has mostly been true. This year, though, the pair suddenly find themselves on starring roles for good teams.

Let's look at each guy individually. 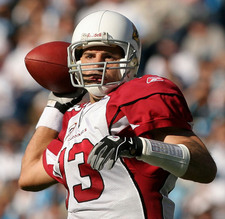 For years I have been wondering when Warner would give up his belief he could still be a top-flight quarterback, end his quest to recapture his St. Louis Rams glory days, and call it a career.

In recent years Warner has been thought of as a statue who used to be great, but now had happy feet in the pocket and -- while he could still wing it -- was a turnover waiting to happen. He was no better than a fill-in.

In fact, Warner has played so well that there are whispers in Arizona that -- should he decide to continue playing beyond this season -- the Cardinals will ship Matt Leinart, the guy once thought to be the franchise savior, out of town.

I have also seen Warner discussed as a potential Hall of Famer.

Who saw any of this coming? I know for sure I didn't.

Perhaps Collins' success is even more astounding than Warner's.

Since leaving the Giants Collins has seemed, more or less, like a guy in exile. He spent a couple of seasons playing for crummy Oakland teams, then hooked on as a backup in Tennessee, where he is in his third season.

I doubt anyone ever thought Collins would be a full-time starter in the NFL ever again, including Collins himself.

Then Vince Young fell apart, Collins stepped in and the Titans are 8-0, the NFL's only unbeaten team.

Collins has not been asked to carry the load that Warner has, or even carry as much responsibility as he did with the Giants.

Yet, Collins is doing everything the Titans have asked. He has just three interceptions. He is making big throws when Tennessee needs them, like they did last Sunday in an overtime victory over Green Bay.

Who saw that coming?

I am actually flabbergasted by the success both of these guys are enjoying. I feel good for them.