Share All sharing options for: 'Kudos & Wet Willies,' beating up the 'Boys edition

In truth, Sunday's 35-14 victory by the New York Giants over the Dallas Cowboys was not a fair fight. Right from the start it was obvious that the only chance the Cowboys had Sunday was if the Giants gift wrapped the game for them.

The Giants did make enough mistakes, particularly with some sloppy offense, to allow Dallas a glimmer of hope through three quarters.

In the end, though, the 7-1 Giants are too good and the 5-4 Cowboys are too beat up, disorganized and disheartened right now to stay with the defending Super Bowl champions.

Honestly, I was amazed at how bad the Cowboys looked. Quarterback Brad Johnson was old and inept, and his replacement -- Brooks Bollinger -- was unprepared and overmatched. Obviously, they miss Tony Romo.

They also have a slew of other injuries. That, however, doesn't excuse the unbelievably bad offensive line play, and the disorganized, often half-hearted effort they seemed to give on defense.

Anyway, the victory means the Giants are firmly in control of the NFC East halfway through their schedule. Let's do our traditional 'Kudos & Wet Willies' before turning our attention to next Sunday night's game in Philadelphia. 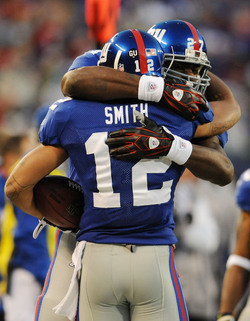