Now I can say it. Going into last night's game I fully expected our New York Giants to lose to the Philadelphia Eagles.

Yet, today the Giants are 8-1 after a heart-pounding 36-31 victory -- a game the Giants thoroughly dominated everywhere except the scoreboard.

Without the two Giants turnovers this game would not have been close. Even with the turnovers the game is a rout if the Giants punch in a couple of touchdowns instead of settling for three short John Carney field goals.

This was a victory -- in Philadelphia against a good Eagles team in a very hostile environment. That's enough to put a smile on my face today, whether the Giants were perfect or not.

Can there be any doubt left that this team is better than last season's Super Bowl championship team? The maturity, the weapons, the stifling defense.

What a great time to be a Giants fan!

Let's get on with our traditional 'Kudos & Wet Willies.' 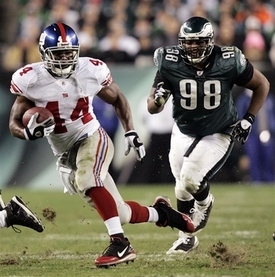 Yes, a new category. Reserved for those Giants who have somehow managed to help both teams at the same time.

Eagles wide receiver DeSean Jackson is one helluva player. His gaffe earlier this season where he let go of the ball before crossing the goal line will be a footnote to a great career. ... Why can't the Giants return kickoffs this season? You'd think that was Reuben Droughns back there. ... Kill Giants offensive coordinator Kevin Gilbride for the nine million draw plays last night (I would like to). But, did you notice some of the new wrinkles in the offense? Bradshaw getting some carries; lots of passes to Boss; Jacobs and Ward in the game at the same time; rolling the pocket a few times. He knows he has weapons, and he is creating more ways to use them.