Share All sharing options for: Eli better than Peyton? Wow! 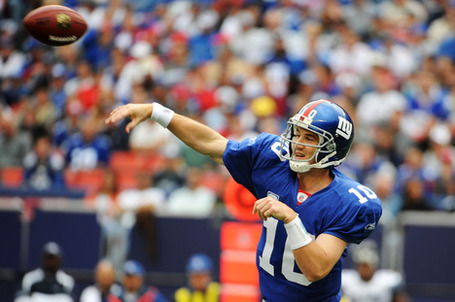 Oh, boy! I read opinions in two places Tuesday that Eli is the best quarterback in the Manning family. Admit it, Giants fans. You never thought you would see the day someone would write that Eli is better than Peyton, and be serious about it.

Yet, Tuesday that was exactly what happened.

Eli Manning is now a better quarterback than Peyton Manning. At the current rate, his career achievements will at least match, and perhaps surpass, his big brother's.

Four games into his fifth season, Eli is 44-30 as a starter and has a Super Bowl ring. At the same point in his career, Peyton was 35-35 and had not won a postseason game. In terms of passing stats, the two players are approximately the same. In terms of leadership, Eli won the Super Bowl in his fourth season with a team whose personnel was so undistinguished, not one of the 16 sets of expert predictions ESPN.com ran before the 2007 season even had the Giants making the playoffs, let alone winning the Super Bowl. On Sunday, both Manning brothers recorded monster wins, and both played well. Eli achieved close to perfection -- he was 19-of-25 for 267 yards, with two touchdowns and no interceptions. His perfect passing made who-dat backup receiver Domenik Hixon (see below) look like a star, and his leadership skills inspired the who-dat Giants offensive line -- quick, how many of them can you name without peeking? -- to play like the New England offensive line of 2007. Stretching back to last season, the Giants have won eight straight games, and this season's 127-49 scoring margin over their opponents is spectacular. If football stays popular for a thousand years, Eli's escape from four tacklers on that last-minute Super Bowl scoring drive will always be one of the sport's signature plays. Peyton is great, and a near-lock for Canton. Eli may be bound for the same place, with his bust in a slightly nicer corner.

Lest you think Easterbrook is spitting in the wind, here is Roy S. Johnson writing for Yahoo! Sports.

For a while Baby Brother was, well, just a Manning – the second son of former Saint Archie Manning to reach the NFL. The words " 'Ole Miss" and "BCS" were never uttered in the same sentence during his years as a Rebel. He entered the NFL as a haughty pout, refusing to play for San Diego and forcing a trade with the Giants that for years seemed as lopsided as the 1626 sale of Manhattan for about a grand.

Now, Eli is not only his own Manning after winning his own Super Bowl ring last season. Baby Brother is also – buckle up for this one – the Best Manning

One quarter into the season, Eli and the Giants are undefeated (not so special given their weak early-season schedule) and sitting atop the NFC East, the NFL's toughest division. Peyton's Colts, meanwhile, are a wobbly 2-2 and lagging behind the Who-Are-These-Guys Titans, who are 5-0.

On Sunday, Eli dissected the Seattle secondary as if the "No-See" 'Hawks were practice cones. He completed 19 of 24 passes and threw for 267 yards and 2 TDs in about three quarters of work in the Giants' 44-6 rout. Big Brother was impressive, too, against the Texans, but needed a late-game comeback from a 17-point hole (buoyed by fumbles from Houston's stand-in QB, Sage Rosenfels) to eke out a 31-27 win. Big Brother finished with 247 yards, completing 25 of 34 passes with 2 TDs and 1 INT. Baby brother didn't throw a single pick.

For his body of work, Peyton may still be the Best Manning on paper. And, yes, if I had to choose one of them for a pickup game as they both stood around needling each other, I'd be hard-pressed not to tab Big Bro'.

But it would be the wrong pick because right now, Baby Brother is the best Manning.

Wow! I am not going to take sides in this debate, and I will never disrespect Peyton Manning -- one of the best QBs to ever play the position.

I am just here to express my amazement. A year ago we were still wondering if Eli could cut it as a big time quarterback in New York. Now, it is being suggested that he could be heading toward a career that will put him among the all-time greats.