Is Plax turning into Manny?

Share All sharing options for: Is Plax turning into Manny? 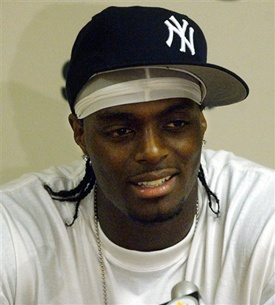 So, I was reading through the transcripts Monday of Plaxico Burress's odd statements regarding his suspension by the New York Giants when I realized what it was that really bugged me about the whole thing.

Here it is. I think Burress is turning into Manny Ramirez. I don't want to think that. I hate myself for thinking it. I hate writing it. With the Giants cruising at 4-0 I don't want any bad thoughts at all messing with the karma.

But, I can't help it. Ramirez is a tremendously talented guy, yet moody, aloof, seemingly oblivious and unpredictable. Same as Burress.

There is one essential difference. Ramirez famously quit on the Boston Red Sox, more than once it seems, before Boston got tired of his act and shipped him to the Los Angeles Dodgers. Burress has never quit on the Giants. Once they get him on the field he is a great asset -- a great player who will take the field hurt, never complains about not getting enough passes thrown to him and makes big plays when they are needed. I hope it stays that way.

Yet, there is the other side. The Plax being Plax side. Like Manny being Manny.

How else do you explain Burress saying he was "cool with" being suspended?

How do you explain this reaction to a question about the suspension changing his behavior?

It hasn’t affected my behavior. It happened, I don’t have any regrets about the situation, I feel good, I am ready to go, I am ready to play, and I don’t see how it is going to affect me. Like I said, I am just going to get back out there and pick up where I left off and then I guess we can let everybody make their assessment and see what they want to say after the game on Monday night. I am ready to go, I am ready to roll, I get to practice for a week before the game, so I am not worried about me performing on the field, that is one thing I am definitely not worried about. I am just ready to get back on the field.

How do you explain this reaction to being asked about reportedly having been fined 40-50 times?

I really don’t know the amount of times, but I do know that I have been fined quite a bit and some things and some of the demands that they ask me to do, I just don’t meet. Do I have an excuse for them? No. Maybe I have a problem with time or something, I don’t know. I haven’t been able to quite put my finger on it, but yeah, I have been fined quite a few times. It hasn’t really bothered me or affected me though. Like I said. when I step on the field it is time to play and that is what I do. If I don’t do things the right way as far as getting there on time or treatments so to speak, I deal with it and get over it and concentrate on my job.

Very odd. No remorse. Seemingly unaffected by the whole thing. Like he can't understand why anyone thinks it's a big deal, or thinks anything should change.

Just the way Manny would have reacted.

I just hope this isn't the beginning of a road that leads to the same kind of acrimonious divorce between Burress and the Giants that the Red Sox and Ramirez suffered through this summer.

I have this nagging feeling that, eventually, that is where this is heading. And I really, really want to be wrong.