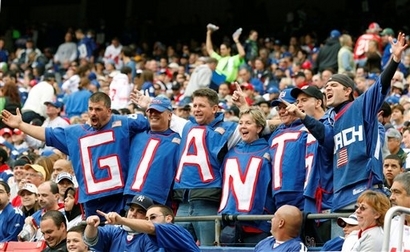 Wow!! Admit it, New York Giants' fans, you have been waiting for an offensive performance like this for a long, long time.

How do I do 'Kudos & Wet Willies' today? Pretty much everyone connected with the Giants, especially the offense deserves 'Kudos.'

Let's do this. No one connected with the Giants deserves a 'Wet Willie.' The Seahawks, though, are another matter.

The entire Seattle team deserves a 'Wet Willie' for pretty much failing to show up. The exception would be quarterback Matt Hasselbeck, who played bravely despite injuring a knee on his first throw.

The biggest 'Wet Willie' goes to Seattle's wide receivers. A big deal was made about Seattle's receivers finally being healthy. Unfortunately, nobody bothered to think about the fact that they can't run routes, can't get open and can't catch the ball.

Oh, before I get to the 'Kudos' did anyone catch the Buffalo game. What is up with ex-Giant Kawika Mitchell and the Troy Palamolu hair? That gets a 'Wet Willie.'

Let's get on with wat will be an All-Kudos edition for the Giants.

I could probably go on and on. If anyone still doubts how good the Giants are they simply aren't paying attention. Right now, this is a better Giants' team than the one that won the Super Bowl.