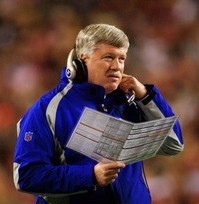 The New York Giants are defending Super Bowl champions. They are 6-1 and leading the NFC East. They might very well be the best team in the NFL right now.

If you can't be happy as a New York Giants fan right now and just enjoy the moment, enjoy the fact that pretty much everyone else is envious of US, then maybe nothing will ever make you happy.

I bring this up because I read too much nonsense Monday that ruined my celebratory mood. I was particularly galled to read a piece in 'The Fifth Down,' the New York Times football blog, that went so far as to call Giants offensive coordinator Kevin Gilbride 'delusional.'

We are midway through the season, Brandon Jacobs has already lost that 1/4 or 1/2 step, and now he is a tremendous liability in short yardage and the red zone. Not to mention how predictable the playcalling is on top of that. There might as well be a neon sign blinking above his head: "IT’S GOING TO ME, GUYS!" When Ward started getting more touches in the latter part of the second half, you could see the offense stop the stagnation. Like everyone has commented here numerous times, this is no KNOCK on Jacobs. It is on Gilbride’s delusional use of him when it is not working. And some of this he should have understood from the film room in New Jersey, not on Heinz Field. Jacobs matches well vs the softie defenses that are not ready for a fight. Against a physical team like the Steelers, you still need to use him, but not at the expense of Ward and/or Bradshaw. And will someone tell Gilbride to practice the dumpoff pass to the RB outlet on the checkdown? Ward and Bradshaw can kill teams like this with that stuff.

Now, listen. There are times when I want to scream at the television like the rest of you over one play call or another. Every fan of every team does that whenever a play backfires or winds up looking stupid. Go read Monday's entries in Behind The Steel Curtain and see what sort of invectives Pittsburgh Steelers fans are hurling at offensive coordinator Bruce Arians. It's not pretty.

Fact is, though, on the heels of Sunday's game is no time to be criticizing Gilbride. The Giants controlled the ball for nearly 35 minutes against the best defense in the league, and put together five scoring drives. True, four resulted in field goals but the Giants did move the football pretty consistently.

Steelers fans, in fact, came away wishing Gilbride called plays for them. Listen to a comment by 'Chicago Steeler' from a fan post here on BBV.

I watched that game with incredible envy on the offensive side of the ball. Your play calling seemed to switch every drive. Granted the Steelers defense was still winning most of the time, but the play calls were never static. Maybe on the one yard line they ran the same plays over and over, but with brandon jacobs you’ve gotta think you can get four inches.

Kill Gilbride for the play-calling at the goal line if you want. I think the failures had more to do with the Giants just not getting the job done rather than calling bad plays. Oh, and give the Steelers defense some credit. That defense is very, very good.

How bad of a job can Gilbride actually be doing?

You might not think the Giants offense is exciting, but victories are definitely exciting. And the Giants are doing what they need to do on offense to win games.

Gilbride has to get credit for these things.

Being critical of Gilbride's handling of Jacobs is silly. Gilbride and Tom Coughlin have used the big beast beautifully this season. Give him the ball early and often to wear down the defense, then use Ward and Bradshaw. The big fella's power and speed set an aggressive tone for the Giants offense and make life easier for the other backs. The fact that the Giants don't overuse him will keep him fresh and effective deeper into the season.

One more thing about predictability and play-calling. Sometimes, when you believe you are better than the other guy you challenge them physically. You dare them to stop you because you don't believe they can. This is the case with the Giants. They have a 270-pound monster of a running back and an offensive line that might be the game's best right now.With that combination what is wrong with lining up, saying 'We don't think you can stop us,' and daring a defense to do just that? More often than not, the Giants win that battle.

I know fans want to see more of Bradshaw. Who would take carries away from, though? Jacobs is averaging 4.9 yards per carry and Derrick Ward is picking up 6.2 yards every time he runs with the ball.

Relax and enjoy the ride, Giants fans. These are the salad days for our Giants, so enjoy them. Considering how things are going for the Giants right now, you have nothing to complain about.