I have to give credit where it is due. That said, 'SBaker' stole my lead for today when he dropped this comment in the 'Open Thread' Sunday night.

Nothing against the Titans, who look great so far, but i find it hard to believe that this isn’t the best team in football right now.

Considering Sunday's performance, that's hard to argue with right now. Unquestionably, the Giants are the best team in the NFC.

Led by Mathias Kiwanuka, the Giants defense laid a beating on Pittsburgh quarterback Ben Roethlisberger, sacking him five times, hitting him on several other occasions and intercepting four passes.

Offensively, Eli Manning's crew held the ball nearly 10 minutes longer than Pittsburgh. They failed to convert a couple of opportunities, but got it done when they had to. That seems to have become the modus operandi for this group, not pretty, not perfect, but good enough.

Yes, the Giants got a couple of good breaks. James Harrison's snap resulting a game-tying safety for one. Harrison, of course, was only snapping because of an injury. Then there was the long touchdown pass to Nate Washington that was called back by a holding penalty.

So, you could argue the Giants were lucky. Good teams take advantage of those breaks, though, and that is what the Giants did.

Theyy played well, kept their poise and made the most of the breaks they were given. As a result, they wound up with an impressive victory over a quality team in a hostile environment.

All of that said, let's get to our traditional 'Kudos & Wet Willies' review. 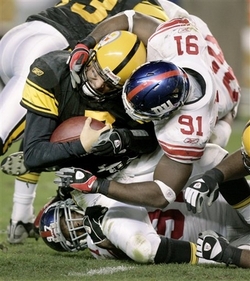 I could probably go on and add more 'kudos,' since a slew of defenders are deserving. This list is beginning to get a little ridiculous, though, so, let's move to the 'Wet Willies.'