Share All sharing options for: Derrick Ward deserves some love 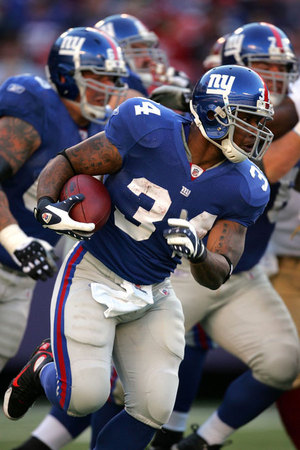 [EDITOR'S NOTE: This is the first meeting of the Derrick Ward 'I Need Some Love' Support Group. Mr. Ward, the floor is yours.]

Hello, my name is Derrick Ward and I am here today asking for support because no one loves me.

You see, I am a running back for the New York Giants. But, every time I get in a game New York fans wish I was somebody else.

Sometimes I hear fans muttering "Why did they take Brandon Jacobs out and put that guy in the game?"

Other fans understand that even 265-pound wrecking balls like Brandon need a rest every so often. Yet, it seems my presence in the game doesn't make them happy, either.

Those fans are always screaming at offensive coordinator Kevin Gilbride. Only, you know they call Gilbride a lot of things other than his last name.

What are they yelling? Something like "Why are you putting that guy in the game instead of Ahmad Bradshaw -- he's the guy we want to watch."

I understand that everybody loves to watch Brandon run over people. Man, what he did to LaRon Landry in the Washington game was cool!

I know everybody loves to watch Ahmad juke and jive and dart in and out and refuse to go down. The little dude makes big plays all the time.

Nobody seems to appreciate what I do, though. Shoot, look up in the stands at our home games. You see No. 27 jerseys for Brandon, you see Ahmad's No. 44, you might even see some Rodney Hampton or Joe Morris jerseys. You won't see any 'Ward 34' jerseys, though.

Man, nobody loves me and I just don't understand it.

I am averaging 7.2 yards per carry this season, and at this rate I will gain 898 yards rushing -- as a backup. I have also caught 13 balls for 116 yards, meaning I would gain more than 300 yards receiving this season at that rate. That's more than 1,200 yards of total offense -- as a backup.

I have power. I have speed. I have elusiveness. I can catch the ball. I can block. I can even run back kickoffs if you need me to.

Still, nobody loves me and I don't know what else I can do.

I guess I will just keep on running. Maybe even running all the way into another uniform next season. Maybe another team's fans will love me.