Share All sharing options for: 'Kudos & Wet Willies,' return of the defense edition 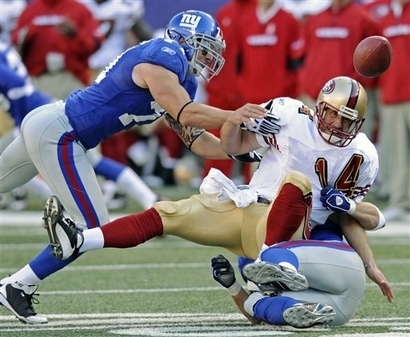 After Monday's loss to Cleveland New York Giants' fans hoped to see an angry active defense against San Francisco Sunday. That's exactly what we got as the Giants overwhelmed the 49ers, 29-17.

A week after not even laying a hand on Cleveland quarterback Derek Anderson, they sacked the flustered J.T. O'Sullivan six times, intercepted him twice and caused him to fumble four times.

Two plays, a long touchdown pass in the first half and a blocked field goal returned for a touchdown made the score reasonably close. The Giants weren't terrific on offense and also committed 11 penalties -- which can't make Tom Coughlin happy.

Now, as we always do, let's review the action 'Kudos & Wet Willies' style.