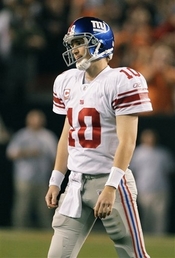 Before anybody goes nuts over the New York Giants 35-14 loss to Cleveland Monday night, we all knew the Giants would not go 16-0. Sooner or later, the Giants were going to play a bad game.

Without doubt, last night was a stinker. If you are going to flush an 11-game road winning streak down the toilet, you might as well do it in grand fashion, and the Giants did as they were dominated by the Browns.

With both Washington and Dallas having lost Sunday, a victory Monday would have been huge for the Giants. The Redskins and Cowboys have two losses, and the Eagles have three, so 5-0 would have looked awfully good.

Give the Browns credit, though. At 1-3, they were a pretty good team desperate for a win. They dominated the Giants from the line of scrimmage, gaining more than 450 yards and never punting once. The vaunted Giants' pass rush was non-existent and Derek Anderson (310 yards passing) had wide open receivers all night.

So, the Giants are 4-1. They lead the NFC East, and you know you would have signed up for that when the season began.

With all of that said, let's move on to our traditional 'Kudos & Wet Willies' review of the carnage.