Share All sharing options for: NFL Week 6 In Review 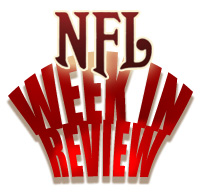 At about 3:30 yesterday I mentioned to a buddy of mine how there were some OK games going on but overall the 1 p.m. games were pretty awful. Within five minutes of saying that the most exciting 30 minutes of football began, seeing four games decided in the last 10 seconds. And this was all before the Dallas – Arizona overtime thriller.

Games of the Week

Minnesota 12, Detroit 10: What an absolutely ugly game this was. Dan Orlovsky running out the back of his own end zone provided the margin of victory for the Vikings. Minnesota could not score more than 10 points against the worst defense in football despite gaining almost 400 yards of offense and having one of the best running backs in the game. Yet after all the negatives, they did kick the game winning field goal with 12 seconds left to get the win and are now tied for first place thanks to…

Atlanta 22, 20: One of the most exciting games of the afternoon. The Bears defense held the Falcons to field goals all day which allowed them to stay in this one until Kyle Orton hit Rashied Davis for a touchdown and a one point lead with 11 seconds left to play. However, thanks to a squib kick and a quick 26 yard completion to the sidelines with one second left, the Falcons were able to line up for a game winning 48 yard field goal. After hooking a 31 yarder on their last possession, Jason Elam was able to nail this one as time expired for the improbable win. And at this point we’re only half way through the fantastic finishes.

St. Louis 19, 17: As the Falcons were lining up for their game winning field goal, the exact same scenario was playing out in . The Redskins, who had no turnovers all season, turned the ball over 3 times on Sunday including a ridiculous batted ball that guard Pete Kendall caught and tried to run with only to fumble and watch the Rams return it for a seemingly game changing touchdown. However, the Skins were able to stay in this one and drive for the apparent game winning Clinton Portis touchdown. In a clear case of déjà vu the Rams took the ensuing kickoff and hit a huge third down pass to rookie Donnie Avery for 43 yards to set up the game winning field goal. Of course these are the Rams, so they managed to get a 15 yard unsportsmanlike conduct penalty while lining up to simply kill the clock. On this day it didn’t matter as Josh Brown’s 49 yard game winner went through the uprights at nearly the exact same time as Jason Elam nailed his 48-yarder.

Houston 29, 28: This game was decided by 1 point as well, but it was a touchdown instead of a field goal that was needed for the Texans to get their first win of the season. Early on in this one the Dolphins appeared to have this game in hand after two huge receptions by fullback Patrick Cobbs of 53 and 80 yards. However, the Texans hit two field goals and returned a punt for a touchdown to pull within 1 at half time. This is what followed: Andre Johnson touchdown, Houston 20, 14, Ricky Williams touchdown, 21, Houston 20. Then in the 4th quarter with 6 minutes left hits a field goal to take a 2 point lead, followed by a touchdown with 1:45 left for a 5 point lead. After 4 lead changes, the Texans had the ball and needed to score a touchdown to win with less than 2 minutes remaining. Somehow, the Texans were able to convert a 4th and ten and with 3 seconds left Matt Schaub ran in on 4th and 2 for the game winning touchdown reminiscent of a game winning QB draw that David Carr ran a few years ago for these same Texans.

Arizona 30, 24: The final nail biter of the weekend took overtime to decide a winner, though not too much of overtime. For what was expected to be a shootout in the desert, these two offenses took their time to click. The first half saw the Cardinals return the opening kick for a touchdown and then fail to do anything else to score points. The Cowboys didn’t even cross midfield until their first score of the half, with 59 seconds left to play. The fourth quarter more than made up for the lack of fireworks, as the Cardinals took a ten point lead with 3 minutes left only to lose it as time expired. The game tying field goal was aided by yet another penalty that occurred while simply trying to clock the ball, as the Cardinals were caught offsides. The 52 yard field goal that ensued was good and the Cowboys won the toss and got the ball to start overtime. All I was thinking about as overtime started was that I hope the Cowboys do not take the opening kickoff and score on the opening possession. The last thing I wanted to hear was Bob Costas bitching about how the overtime rules in the NFL are not fair and they need to be changed. There are three distinct phases of football, any one of which can decide the game, and in this case it was special teams that won the game for the Cards. So we survive one more week of not having to listen to how we need to change overtime rules, which will change once the next team takes the opening kickoff and marches down the field to win, but we’ll cross that bridge when we come to it.

Hard to believe there were actually other games this week.

Maybe we ought to hold off on the Eli is better than Peyton talk for a little bit.

We should probably hold off on the idea that the Patriots are going to be OK without Brady for a little bit, too.

Cincinnati is going to get a win sooner rather than later, they gave the Jets a good fight for 45 minutes of football with Ryan Fitzpatrick under center.

For all the talk about the NFC East, the NFC South is looking pretty strong right now.