Share All sharing options for: Giants seem reluctant to meet price for Gonzalez 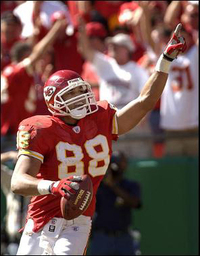 We know by now that our New York Giants are on the short list of teams who might be a match if the Kansas City Chiefs decided to grant star tight end Tony Gonzalez his wish and trade him to a contending team.

If Kansas City Star columnist Jason Whitlock is right, the Giants won't give the Chiefs enough to put the 12-year veteran in blue by Tuesday afternoon.

Trading Tony Gonzalez to a playoff contender just days before Tuesday’s NFL trading deadline and receiving appropriate compensation might be an impossible task.

Gonzalez desires to be dealt to a team worthy of his skill, and the Chiefs are trying to accommodate him, according to the involved parties I spoke to Saturday. Gonzalez would like to join the New York Giants, the defending Super Bowl champions. The Giants are locked in the super-competitive NFC East, battling playoff-caliber peers Dallas, Washington and Philadelphia.

The Giants traded star tight end Jeremy Shockey during the offseason to New Orleans. Gonzalez makes sense in New York. But the Giants’ front office, sitting on a Super Bowl title and feeling no urgency to win, isn’t all that interested in giving Kansas City fair compensation.

The Giants offered less than a fifth-round pick for a Hall of Fame tight end who can still play at a Pro Bowl level for the next three years. I don’t blame Carl Peterson for balking. He drafted Gonzalez and built Kansas City’s passing game around Gonzalez for the past decade.

It would be insane to give Gonzalez away for anything less than third- and sixth-round picks. The Saints gave New York a second and a fifth for Shockey, who is younger but less productive than Gonzalez.

I reached out to the folks over at SB Nation's Chiefs blog, Arrowhead Pride, for some thoughts on a possible Gonzalez trade.

Joel Thorman, one of the writers at Arrowhead Pride, agrees with Whitlock.

Honestly, I don't expect this deal to get done unless the Chiefs can reasonably expect a 3rd round pick back whether that comes straight up or some sort of performance based deal. Our GM, Carl Peterson, has historically dragged these things out (Trent Green to Miami in '07, Jared Allen to Minnesota in '08) so it will be interesting to see how he responds with a deadline that's quickly approaching.

Gonzalez is, without doubt, a Hall of Fame player and one of the best tight ends to ever play. He has just 21 catches in 5 games this season, however, and his numbers beg the question of how much Gonzalez still has left.

Thorman believes that is a non-issue.

Tony has plenty left in the tank. Take a look at his numbers the last three years, they haven't slowed down a bit. He's 32 years old but can reasonably be expected to play at an elite level through 2009, and probably through 2010 in my opinion. He keeps himself in excellent shape and has missed just two games since his rookie season.

Remember what the Giants had with Shockey? TG has trumped him every offensive category for their entire careers and I suspect he would continue to do so through 2009.

The way I look at is this - a Super Bowl window of opportunity doesn't last long and the Giants presumably understand that. Tony could step in and contribute immediately at a high level at least through 2009.

I tend to agree. I think TG's numbers this season are a result of the mess at quarterback in Kansas City, where I believe they have had a different starter every week.

Thorman also adds Gonzalez would be a good fit in New York.

He would have no problem lessening his role at this point in his career. He is a consummate professional in every aspect of the game. He's outstanding on the field, inspiring off the field and among the most media savvy players in the NFL. Plus, his wife October is a knockout.

At this point, he's just looking for the ring. He's played in 2 playoff games with the Chiefs and won exactly 0 of them. The entire time he kept his mouth shut and talked about helping the young guys along and pushing for next year. I've never heard anything selfish said about Tony.

He was a Chief for life until this offseason when he began to give hints that beginning a rebuilding process in his twilight years was going to be tough so these trade talks aren't coming out of nowhere. All he's looking for is the ring and according to reports believes the Giants are the best fit.

I have my doubts that this deal will get done by Tuesday's 4 p.m. EST trade deadline. Surprisingly, though, I find myself thinking this might not be a bad idea at all.

Gonzalez is an all-time great player, seemingly a great guy and great teammate, and seems to have plenty of good football left in him.