Since we previewed the Browns just a few weeks ago during preseason, we'll change it up a little. 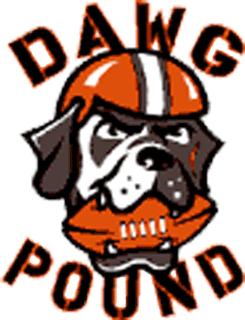 We had the old "Brownie the Elf" logo a few weeks ago, so today we'll shout out the "Dawg Pound."

Last time they met: The last time the Giants and Browns met in the regular season was in 2004, and saw the Giants beat the Browns, 27-10 at Giants Stadium.

BY THE NUMBERS: 37 -- Penalties committed by the Browns in four games.

QUOTE TO NOTE: "The Giants will eventually lose a game; there isn't going to be another undefeated team like NE last year; this could be a trap game for the Giants, due to overconfidence based on our record and what they did to us the last time.

WHAT THEY'RE SAYING: Here are some stories out of Cleveland on the game: